Out of all the powerful women in Hollywood Vogue could have chosen for its biggest issue of the year — the September issue — the magazine chose the one woman who can’t seem to stop taking over the world — Beyoncé. The singer, dancer, and designer looks stunning on the cover, wearing a lace dress and sequined purple blazer. The image, shot by famed photographer Mario Testino, shows Beyoncé sporting a wet hairstyle as she stares down the lens with her usual fierceness. “Just B,” the cover line reads. “Beyoncé and the art of global domination.” In other photos,the mom of Blue Ivy is seen wearing a low-cut black dress and going commando in a lace gown.

‘There’s only one September issue, and there’s only one Beyoncé. It used to be that the great pop stars with fashion and style gave us small variations on one grand theme. Tina Turner: minidresses and honey tresses. Janis Joplin: boas, bangles, and bell-bottoms. Cher: spangled striptease getups with mythic Third World touches. Nowadays fashion isn’t about the grand theme, it’s about juxtaposition, and it’s filled with allusions to movie and art history; to music and dance styles; to iconographies of race and ethnicity, religion and gender. Madonna opened the door to this collage approach. Today we see it in the wigs, masks, and sculpted costumes of Lady Gaga and Nicki Minaj, the restless dazzle of Rihanna’s couture choices. And, of course, in the music, dance, decor, and looks of the ultimate streamed collage: Beyoncé.’

Check out pictures below: 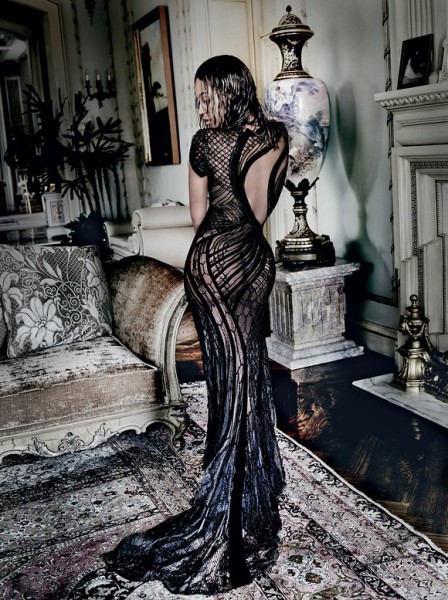 0 thoughts on “Bow Down For Queen Bey! Beyonce By Mario Testino For Vogue September 2015 Issue”