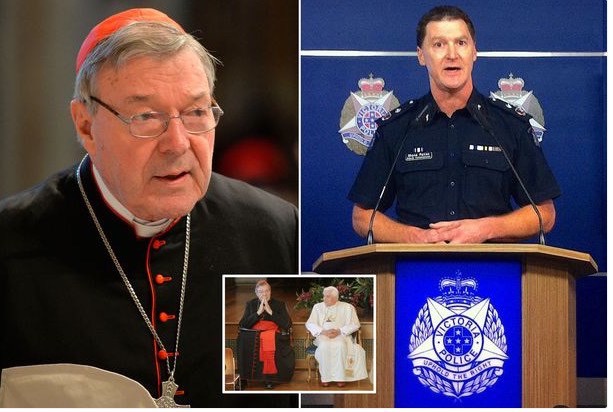 The Pope’s financial adviser and third-highest cardinal in the Vatican has been charged with multiple child sex offences. Cardinal George Pell has been summoned to appear in court in his native Australia next month.
Cardinal George Pell charged with multiple child sex offences It comes after detectives in Victoria, where Pell was a country priest in the 1970s, began investigating complaints of historic offences last year.
“Cardinal Pell is facing multiple charges in respect of historic sexual offences,” Victoria state police deputy commissioner Shane Patton told a news conference in Melbourne. “There are multiple complainants relating to those charges,” he said.
Pell was charged by summons to appear before a Melbourne court on July 18, Patton said. Pell, 76, was a priest in the rural Victorian town of Ballarat before he was appointed Archbishop of Melbourne. He has lived at the Vatican since 2014.
The Catholic Church in Australia said Cardinal Pell “strenuously denies” the sex assault charges. “Cardinal Pell will return to Australia, as soon as possible, to clear his name.
He said he is looking forward to his day in court and will defend the charges vigorously,” the Catholic Archdiocese of Sydney said in a statement.