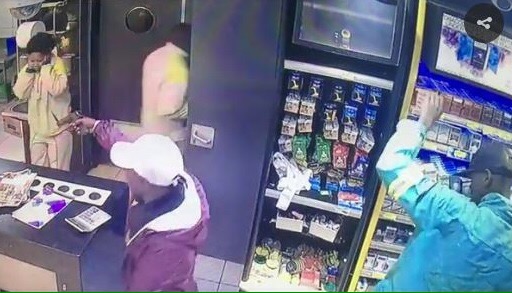 CCTV footage has emerged of a gang of robbers attacking a petrol station store in Mpumalanga, South Africa.
The footage, filmed on July 8, shows an unmasked gang of five carrying out the robbery attack at the store.
In the footage, an armed man is seen confronting a terrified female cashier who is ordered onto the floor as other gang members search the store for cash.
A petrol attendant who is also seen entering the store from the back door is also confronted with a gun to his face. Luckily for him, he escaped alongside with another male cashier, as the two of them barricade themselves into a room behind the counter, leaving the female cashier with the gunmen.
The whole robbery operation is said to have taken only a few minutes.
Watch video: