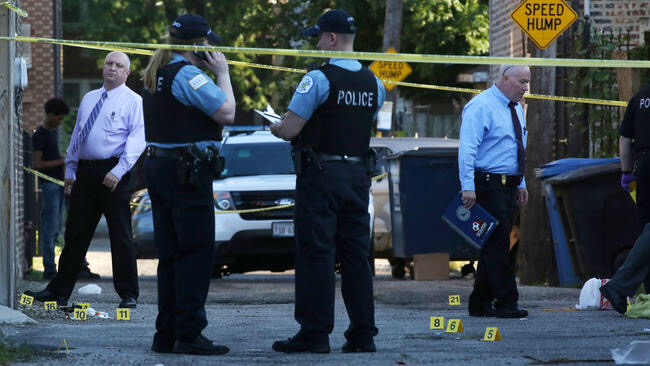 A woman shot while with her 4-year-old son and a 19-year-old man, who were also wounded in the Austin neighborhood attack, has died, police and relatives said.
The child was with his 27-year-old mother and another man in the 5200 block of West Kamerling when gunmen “ambushed” them and began firing, hitting the three, police and relatives said.
The woman, who was shot in the head, was taken to Mount Sinai Hospital where she later died, according to police.
The boy, who was shot in the arm during the 5:20 p.m. attack, was in good condition at Stroger Hospital. The 19-year-old old man was in good condition at Mount Sinai with gunshot wound to the left arm, police said.
Ronnie Betts, who identified himself as a cousin of the 27-year-old woman, said his cousin and her son were on the porch of a home but they left and began walking through an alley when suddenly they were “ambushed’’ by gunmen who were on foot.
Betts, who was nearby, then heard about a dozen gunshots and saw the boy running back to the home, only feet away.
Blood was gushing from his arm.

“He said his mom’s been shot,” Betts said.

Family found the 27-year-old face down in the alley, Betts said.
The boy, who is terrified of needles, was scared to go the hospital, said relatives.