The South African president, Jacob Zuma, has narrowly survived a motion of no confidence against him in parliament. 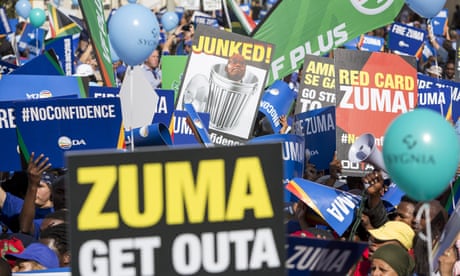 It was the eighth such vote of his increasingly beleaguered presidency. In a secret ballot, a broad coalition of opposition parties and renegade MPs from the ruling African National Congress (ANC) were unable to muster the simple majority needed to remove the president. 198 MPs voted against the motion of no confidence, which would have forced Zuma and his cabinet to resign immediately.

In the hours before Tuesday’s vote, a series of coordinated protests across South Africa demanded Zuma’s removal. A petition signed by more than a million people was delivered to the deputy president, Cyril Ramaphosa, who is seen as Zuma’s main rival.

Zuma, 75, has never been far from scandal since he became president in 2009. Another major criticism raised during the parliamentary debate included allegations that he had allowed the state to be “captured” by the Guptas, an Indian business family that has been at the centre of a string of media exposés about graft in government and state-owned enterprises.

“I never imagined that one day I would be here in this parliament fighting a new form of oppression,” Maimane said during the debate on the motion. “A corrupt system that keeps our people imprisoned in poverty. If you told me that one day our democratically elected president would end up corrupted and captured by a criminal syndicate, I would have never believed you. But here we are.”

In response, ANC MPs argued that the party remained united behind Zuma, and had set up internal processes to deal with accusations of corruption and poor governance. The no-confidence motion was dismissed repeatedly as an attempted power grab by the opposition.

“They are using the constitution so as to collapse government, deter service delivery and sew the seeds of chaos in society so as to ultimately grab power … Shame on you!” said Doris Dlakude, the ANC’s deputy chief whip.

Although Zuma has survived this battle, he is still fighting for his political future. His term as president expires in 2019, and under the South African constitution, he cannot run again.