Video: ‘He Crossed The Line Talking About My Family’- Jay-z Opens Up On His Beef With Kanye West

Jay Z and Kanye West used to be close pals and business partners but have since stopped collaborating.
In a recent chat with Rap Radar podcast to discuss his song “Kill Jay Z.”, the rapper opened up about his beef with Kanye. 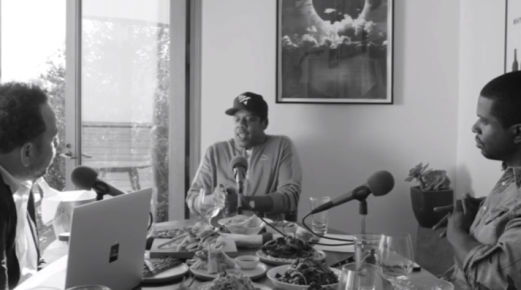 According to him, Kanye West crossed a line during a 2016 rant about his issues with him in which he called out his wife Beyonce and said she was acting like a diva and also called out Jay Z’s daughter, Blue Ivy.

“But what really hurt me, you can’t bring my kid or my wife into it. … We’ve gotten past bigger issues, but you brought my family into it, now it’s a problem with me.” .

“You know it’s a problem because me and him would have been talked about it, been resolved our issues. And he knows he crossed the line. ‘Cause we’ve never let this much space go between one of our disagreements and we’ve had many. That’s part of who we are.”.

Jay says Kanye knows how seriously pissed off he is … and the two aren’t close to resolving it.
At the 2016 show, West called out Bey and Jay, referring to the 2009 incident when he interrupted Taylor Swift’s Video Music Awards acceptance speech to say that Beyoncé deserved to win.
He also ranted that Jay never brought Blue Ivy to his house to play with his kids.
Watch video: