A man Saeed Ahmad, hailed a cab to flee a burning car leaving a woman to die in the fiery wreck, in  Brooklyn, New York – police say.

While Harleen Grewel burned in the passenger seat of a destroyed Infiniti on the Brooklyn-Queens Expressway, early morning traffic inched through the single lane not engulfed in flames.
The driver in a fiery crash in Brooklyn hailed a cab and left the scene — leaving his female passenger burning to death inside the flame-engulfed car, according to police.
The New York Post reports that Saeed Ahmad, 23, took the taxi to Maimonides Hospital in Borough Park, leaving his burning 2007 Infiniti G35 sedan with the victim inside, police said.

The charred body of Harleen Grewel, 25, of Astoria, Queens, was discovered in the front passenger seat after fire fighters extinguished the flames from the 4am (7pm AEDT) crash. 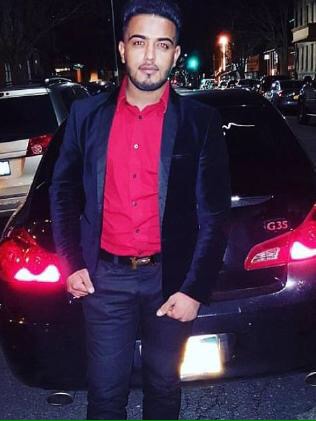 Police caught up with Ahmed at Maimonides, where he was being treated for burns to his extremities.

Police say Ahmad, of Mill Basin, had lost control of his car as it was heading westbound near Centre Street in Red Hook. The car burst into flames after striking a concrete barrier.

“That was my child! We lost an angel!” a grief-stricken woman, believed to be the mother of victim Harleen Grewel, sobbed outside the family’s two-story Astoria home.

“I didn’t even see her yet. We [sic]didn’t even know what happened,” said the visibly shaken woman, who declined to give her name before adding, “Please let us grieve!”

Ahmad was later arrested on charges of criminally negligent homicide, leaving the scene of an accident, aggravated unlicensed operation of a vehicle and speeding.

Police say Ahmad, of Mill Basin, had lost control of his car as it was heading westbound near Centre Street in Red Hook. The car burst into flames after striking a concrete barrier.

Video obtained by ABC 7 shows flames engulfing the car as a man walks toward a waiting cab, gets inside, and is driven away.

“Can I get a ride?” he can be heard asking the cabbie.

Ahmad and Grewel may have been dating, the station reported.