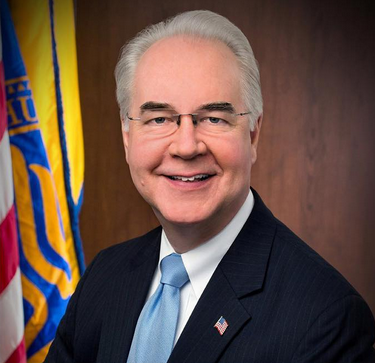 On September 29, 2017, the White House announced that Tom Price had resigned. Price, with a tenure of 231 days, became the shortest-serving Secretary of Health and Human Services in history

In a series of reports in September 2017, Politico reported that since May 2017, Price had expended more than $1 million of department funds for his own travel on private charter jets and military aircraft.
Many of the flights were between cities that are easily accessible by train or car and have frequent, low-cost commercial airline service. Five Democratic members of Congress requested an inspector general’s investigation into Price’s use of private aircraft. Price’s use of private planes was legal but was criticized by ethics experts as a misuse of taxpayer funding. Price’s spokesperson justified Price’s use of private jets as a reasonable precaution, given that Price was once unable to attend an important meeting because a commercial flight was cancelled; Politico noted that the flight in question was cancelled because air travel had been virtually shut down in the region in question at the time, preventing even private jets from taking off. As a congressman in 2009, Price had criticized the use of private jets by government officials as “fiscal irresponsibility run amok”.
Following Politico’s reporting on the matter, Price said that he would stop taking taxpayer-funded private jet flights pending a formal review by his department’s inspector general. President Trump said that he was unhappy about Price’s expenditures, but declined to state whether he would fire him. Price said later that September that he would reimburse taxpayers for $51,887, which he calculated as the cost of his seat on the more than $400,000 worth of charter flights. He also vowed to discontinue the use of private charter flights for his travel. Later that day, it was revealed that the expenditures for Price’s charter and military flights were higher than $1 million, including flights taken by Secretary Price and his wife to Europe and Africa. Politico also noted that Price had, in June 2017, defended a proposal to cut $663,000 from HHS’s $4.9 million annual travel budget.

Yesterday September 29, 2017,  Price resigned as Secretary of Health and Human Services following criticism of his use of private charters and military aircraft for travel.